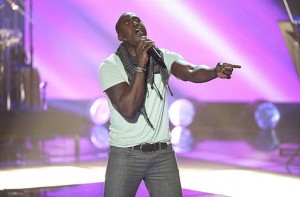 Congrats to soul singer Jermaine Paul, who has just won The Voice, a singing reality TV show competition that is one of my guilty pleasures.  Even better than his soulful voice, and silky chocolate good looks, is what he represents:  A humble father of four who upon winning the competition kissed his  Dad, and danced with his wife while choking out his rendition of R. Kelly’s “I Believe I Can Fly.”  Paul, a former Alicia Keys backup singer, walks away with $100,000 and a contract from Universal records. Kudos to country singer Blake Sheldon for being Paul’s mentor.  The Baldhead Empress loves a great story.  It’s all about affirmation.  One Love!