They Just Don’t Get It: the Sexual Harassment/Inappropriateness Epidemic in Real Time

Sally Hawkins and Octavia Spencer
in the Shape of Water

When I really want to see a movie, I go to the screening first, and then read the reviews after. Recently I was stunned to see a line in a review of The Shape of Water by Dani Di Placido, a contributor to Forbes. About Richard Strickland, the agent/bad guy in the film (played by Michael Shannon), in relationship to a mute cleaning woman Elisa Esposito (Sally Hawkins) Placido writes, “He . . . nurses a sexual attraction to Hawkins, mainly due to the fact that she cannot speak, which tells you everything you need to know about the man, really.”

Uh . . . no.  In one scene the agent sneers lewdly at the cleaning woman with cold, dead eyes, and comments about her squeaking during sex, mocking the muteness that would ultimately protect him from retribution were he to attack her. His body language is clearly sexually aggressive, menacing. She stumbles out of the room, shaken. I relax in my seat in the cinema, unclenching the muscles that had automatically locked because I thought I was about to watch an on-screen rape.

How did Di Placido, a young male reporter who appears to be in his mid-30s, get this so wrong? How did he confuse a brazen act of sexual aggression by a powerful professional against a disempowered, disabled menial worker with “sexual attraction?”

It is no surprise that the nation is reeling from sexual harassment scandals involving high-profile men from Hollywood/Infotainment to the halls of Congress. Why? Because they, like Di Placido, apparently, just don’t get it. In several small gatherings of my women friends and relatives over the last few months, the topic of sexual harassment would inevitably come up, and someone would utter the plaintive cry: “Who’s raising these men?”

Before you pick your jaws off the ground, Affirming Community, and ask whether the school has guidelines for sexual harassment and inappropriateness, I must preempt you by sharing that I watched multiple mandatory videos on sexual harassment and bystander awareness before registering for Fall classes. (Apparently, it is the new thing for bystanders—code for other women—to be charged with rescuing our sisters from the bad behavior of others, our Supergirl to their Sexual Joker/Predators.)

On the very week I read that foul, sexist, racially backward account of male bonding for class, university students were required to attend yet another sexual harassment/sexual appropriateness training or view an educational video under threat of not being allowed to register for the Spring semester. The response to the bullying behavior of potential sexual predators was for us as an entire student community to be bullied into taking yet another seminar of this type.

Ultimately the standards held up in the trainings don’t extend to the work that students share in the writing workshops; the left hand doesn’t know what the right hand is doing. When questioning this lack of follow-through, I was told that it is hard to police art. Perhaps the professor who allegedly tried to force himself into the mouth of a woman and “retired” over the holidays was doing performance art. University administrators, with their access to so much information and resources, just don’t get it.

Later in the semester, I submitted a piece in the same Workshop class about my father’s odyssey from farm boy in rural Jamaica to Cornell and Guelph universities, to an assignment with the United Nations Development Program in Liberia, to his eventual promotion to the head of the team there. The classmate with the pornography story wrote me that my father is “mythological” and suggested that I make changes to his history, as if that is possible. Gender microaggression with a topping of racial microaggression.

This student and his father did not bond over camping trips or adages such as “Your word is your bond” or “treat people the way you want to be treated.” Instead they coalesced around diminished images of women, specifically women of color who have been stereotyped as sexually promiscuous since they were kidnapped and brought to these shores for use as slaveholders’ mules and sexual outlets.

When presented with an account of a tenacious, ambitious well-educated, hard-working Black individual by his proud daughter, the response from this student was that this man must be “mythological.” Backwards much? This student doesn’t know any better. He just doesn’t get it. For the women with the plaintive cry, “Who’s raising these men?” Asked and answered. We are in much deeper trouble than we can even imagine. 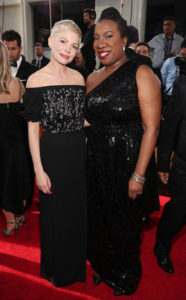 So, how can we be proactive in this seminal moment? I applaud the #MeToo campaign as it was originally conceived of by Tarana Burke, and in its current configuration. I also embrace the Hollywood community’s Time’s Up movement, and especially the legal defense fund (around $16 million at this writing) established for women in all industries who experience sexual harassment. These are great strides.

I do caution, however, viewing the swift axing of individuals like Matt Lauer as progress. I find it inconceivable that executives at NBC knew nothing of Lauer’s alleged behavior before the recent accusations went public. I believe that they simply stemmed the tide of potential new accusations and lawsuits by firing him quickly.

And while many individuals applaud Hoda Kotb’s promotion to anchor in Lauer’s place at the Today show, and celebrate her ratings surge, how many have stopped to notice that Kotb is reportedly being paid $7 million, approximately one third of Lauer’s salary? Who’s the real winner here, one might ask.

Companies practicing CYA and removing high-level employees they have always known to be problematic once public accusations are made can conceivably hurt Time’s Up. The appearance of a lack of due process will only blow back on mostly women accusers seeking justice. It is my hope that future accusers stay off Twitter and use the legal channels available to them once they make the difficult decision to go public. Public floggings cannot substitute for legal comeuppance.

Sisterhood is critical here. Actors Allison Janney and Margot Robbie will do well to stop trotting around former skater Tonya Harding this awards season like she is a prize poodle. Her role in the attack on fellow skater Nancy Kerrigan 23 years ago should be just as reviled as any other aggression against women.

The false narrative that the skating world didn’t embrace Tonya simply because she was working class makes mockery of the many prejudices levied upon amateur athletes including Kerrigan and others both in and outside skating. The actors’ desperation to promote the film and their own careers plays into the idea that this movement is conceived of and run by liberal hypocrites speaking with forked tongues. Janney and Robbie just don’t get it.

As celebrities like actor Catherine Deneuve (last screen credit 2013) and singer Seal (released from Warner Brothers record label in 2015 and currently unsigned) besmirch the movement and its leaders, organizers must put on their big-girl feminist drawers and get ready for the onslaught of attention-seeking naysayers who have otherwise faded from the limelight. Revictimization is part of the process of achieving justice. This battle is big and messy, and it has just begun. So buckle up.

And for those who don’t know the difference between complimenting a woman on the shade of her sweater and whipping it out, Affirming Community, please share with them the definition of sexual harassment (below).

Acclaimed entertainment attorney Nina Shaw (a former board member of mine during my nonprofit days at The Montel Williams MS Foundation) is a founder of the Time’s Up Movement. As she said on last Sunday’s CBS This Morning, in answer to individuals who claim that they do not know what to say or do in today’s environment, “You know the difference between right and wrong. Is it a conversation that you would be comfortable going home at night and telling your wife or your mother that you had?” Vintage straightforward Nina.

In a society where people just don’t get it, I will go a step farther: If you have to ask someone whether it is right or wrong, it is wrong. Keep it simple: Stick to work topics in work environments. We’ll all be the better for it.

About Sexual Harassment
It is unlawful to harass a person (an applicant or employee) because of that person’s sex. Harassment can include “sexual harassment” or unwelcome sexual advances, requests for sexual favors, and other verbal or physical harassment of a sexual nature.

Harassment does not have to be of a sexual nature, however, and can include offensive remarks about a person’s sex. For example, it is illegal to harass a woman by making offensive comments about women in general. Both victim and the harasser can be either a woman or a man, and the victim and harasser can be the same sex. Although the law doesn’t prohibit simple teasing, offhand comments, or isolated incidents that are not very serious, harassment is when it results in an adverse employment decision (such as the victim being fired or demoted).

The harasser can be the victim’s supervisor, a supervisor in another area, a co-worker, or someone who is not an employee of the employer, such as a client or customer. —U.S. Equal Employment Opportunity Commission

To join me in contributing to the Time’s Up Movement, please go to: https://www.gofundme.com/timesup.

Baldhead Empress, Cheryl McCourtie, has been a magazine editor and writer, and a nonprofit fund-raiser and communications specialist. Raised in Liberia, Malawi and Swaziland, she is avidly interested in women across the globe, in particular and people in general. The Baldhead Empress site is one of affirmation. Cheryl looks forward to sharing her positivity with as many like-minded people as possible. One Love!.
View all posts by Cheryl_McCourtie →
This entry was posted in Essay and tagged Time's Up. Bookmark the permalink.