Lowering the Bar on Barr

Roseanne Barr should not have been sacked for her racially prejudiced tweet yesterday. Her firing now makes her a martyr in Trumpville, and there will be repercussions—more micro-aggressions and outright violence—meted out on people who the resident of the White House has told his followers are their enemies: immigrants, people of color, people non-Christian faiths,  smart women.

It is ironic that many of these supporters are willing to overlook Barr’s 1990 screechy rendition of the “Star Spangled Banner,” which ended in her grabbing her nether regions for no apparent reason, while they despise Black athletes for taking a knee during the anthem to protest police brutality. But none of this needs to make sense. It just is.

For those of you who missed it, here is a photo of Barr’s tweet.

If I were a psychologist I would study the obsession that the resident of the White House and his followers have with President Obama and ONLY those members of his cabinet who are Black. A year and a half after President Obama and company have vacated the public scene these twisted individuals continue to denigrate them for no apparent reason. It is as if they have held onto their hatred of the idea of them for eight years and, disoriented, no longer know what to focus on.

In this mess that Barr has created my heart goes out to the cast and especially the crew of Roseanne, those faceless individuals who toil behind the scenes, and support families on income from work we the TV viewing public don’t recognize.

I would also like to be a fly on the wall in the home of the effervescent 8-year-old Jayden Ray, the solo Black actor in the rebooted series, as her parents tell her what happened to her gig. I hope that whatever age-appropriate explanation they share with her won’t dull the considerable spring in her step.

I  stop short of lauding ABC for their swift action on Barr. Just like some of the firings in the #Metoo era, what looks like decisive action to the public is, more likely, the network brass realizing that the bad behavior they dismissed as being part of the talent package can no longer be contained and concealed.

Is someone like Barr with a long list of inappropriate actions, racially prejudiced tweets and unresearched attacks on public individuals likely to turn up on time for work? Answer questions asked of her by studio executives? Agree to the inevitable changes in scripts that the suits want? ABC’s firing of Barr is the ultimate solution—using the excuse of her well-documented racial prejudice—to cure the migraine-level headache that she most likely was. The we-versus-them camps are then left to pick each other to pieces. And we will.

In last night’s MSNBC special, “Everyday Racism in America,” Valerie Jarrett, with all her well-meaning, Black middle-class gusto implored the public not to worry about her and to use this incident as a “teachable moment.” But what is it that we are supposed to learn? 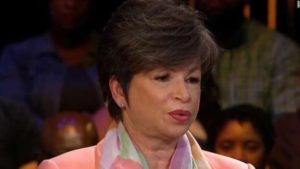 It is my contention that rather than dousing the flames of racial hatred with our Black middle class turn-the-other-cheek and go-high-when-they-go-low mantras we are pouring gasoline on them. Our glossy educations, clipped speech, starched outfits, nice homes and superior behavior are further infuriating to those who are already against us. And what would it look like if we, when pinched, rather than forgiving the aggressor, doubled up our figurative fists and flattened her or him to the ground? What do you think, Affirming Community? Let me know.