With the Immigration Debacle, I Ask: Collaborator or Member of the Resistance—Which One Are You?

Several years ago, a TV ad that featured a young white boy abandoned by his mother in a train station caused worldwide condemnation. The stunt was for an anti-smoking campaign calling attention to the children left behind by deceased smokers. Behind the cameras social workers monitored the boy as his real-life mother momentarily disappeared from his view and he began to cry. The claim that the boy was giggling and happy within minutes of being reunited with his mother did little to quell the outrage and cries of child abuse.

If only that were the case across the political spectrum for the debacle caused by the resident of the White House’s zero-tolerance immigration policy. The world watched slack jawed as mostly brown Latino children were pried from their parents and put in dubious accommodations; some as young as nine months have been flown clear across the country to states as far as New York while their parents are incarcerated in Texas. Even First Daughter, with her carefully modulated voice, was rendered both mute and invisible for most of the week until she re-emerged to weakly thank her father on Twitter for reversing his policy—at least on paper.

As someone who worked for an umbrella agency representing pre-school children, I am stunned that any policy exists in the United States of America that allows children to be ripped from their parents undocumented, with no system to reunite or track them—in 2018. When the resident of the White House’s wife (the least educated First Lady in 50 years) met with human welfare workers who were housing some of these children to offer her support last week, the only thing I could think of is does she know how to do DNA testing? Given the lack of protocols, that is the only way some of the babies will be reunited with their families.

I won’t even address the First Lady’s choice of wardrobe. It speaks for itself. I do, however, call attention to her smug pronouncements during the presidential election that immigrants should enter America legally, as she did. Then it became public that she worked while on a tourist visa when she first came to the United States, a choice that she did not record on her citizenship application. She apparently then filed for her parents—family unification—something her husband opposes for others. Double standard much? 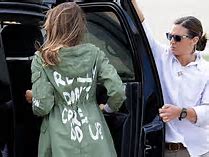 On the news program To the Contrary with Bonnie Erbé on PBS last Saturday, one of the right-wing panelists gamely offered that the lack of support from people in her party for the separated families is because they blame migrant parents for having their children taken from them in the first place.

So, if I am following this correctly, as parents flee violence with their children, trying to figure out which of the coyotes is less likely to rape and/or kill them, they should stop to watch Fox TV coverage that characterizes them as criminals and gleefully shares the White House’s diabolical new policy. Once they figure out they are more likely to be candidates for prison than asylum, they should turn around, and make the reverse journey with a new set of coyotes, paying for their return passage with fairy dust. Sounds like a plan.

According to the Institute for Women’s Policy Research the average annual cost of child care is higher than the price of in-state college tuition in 31 states. It also exceeds 40 percent of the average annual income of single mothers in 22 states. In New York where I live the average cost of care for one child is $14,500. . . .

The followers of the resident of the White House gleefully support him as he picks of his hated classes of people: wealthy Black athletes, Blacks in general, smart women leaders, America’s allies, brown immigrants. In their shared rage and aggression against these groups, they do not hold his feet to the fire and demand that he create positive policies that help their pockets and their communities.

I am also fascinated that there has been no discussion about those illegal immigrants who have fled the drug cartels. As usual in this country, where short attention spans rule, no one is talking about the fact that the American and European appetites for drugs help fuel cartel activity. The cartels and their ensuing gangs and scorched-earth violence are in part sustained by recreational drug users and junkies in America and Europe.

Decades of American support for non-progressive dictatorships in South America—already buckling under the weight of self-inflicted political trauma—have also contributed to that region’s violence and instability. Magically many Americans accept no responsibility for nor have interest in the root causes of much of this chaos. Instead, egged on by the resident of the White House (who is now suggesting that migrants be denied due process in America) his followers see themselves as unwitting victims of these brown others.

Many Americans, never great students of history, are in love with their own sense of goodness and philanthropy. I will never forget a gleeful group of American housewives at the height of the American invasion in Iraq who sent their used pink curlers to this nation so that women there could become hairdressers.  Smiling brightly for the cameras, they touted their efforts to reach across the world and show Iraqis democracy.

Did any of these smug “philanthropists” consider that maybe they should have voted against or opposed the war in Iraq instead so that Iraqi women could continue to be self-sufficient? And while we are on the topic of a lack of historical context and organized amnesia, this is not the first time children have been systematically taken from their parents under the cover of the law. Need I spell it out?

In this new, diabolical era in which we find ourselves, one that includes the state-ordered kidnapping of children, dog pens doubling as child care centers, gag orders, secrecy and lies, we must embrace the post-911 motto of New York City’s transit system: “If you see something, say something.” Collaborator or member of the resistance. Which one are you? I choose the resistance. Because tomorrow they will come for me.